We are finally in possession of critical information concerning Nerdcore Risings premiere at South by Southwest (SXSW) in Austin. We have three screenings  which means triple the nerdy fun and triple the chances to eat authentic Central Texan BBQ.

For those in the super-keen-on-Nerdcore category, we have a treat: After the first screening (March 9), we invite you to throw down with us at the films premiere party. All you need is your ticket stub and the Will to Fun. A little guy by the name of MC Frontalot (who actually stands at a 62 tall) will be performing something called Nerdcore. Frontalot will be followed by a guy named Prince Paul who will be DJing something called legendary hip hop. Does that sentence earn a double take? I do believe it does! Thats right, MC Frontalot and hip hop hero Prince Paul will be in the same room. Stranger things have happened (for example, theyre in the same movie).

And, if youre interested in helping us with street-teaming activities while were in Austin, please send me an email. Wed love to have your help! Especially if you live there and know whats up.

Theres more helpful details below but its kinda boring and overly logistical so Ill officially end the blog here and let that information be a part of the oft-neglected postscript zone.

Cant wait to nerd you up in Austin,
negin & gang at Nerdcore Rising

How to get Tix:
You can spend a large amounts of money and buy a festival badge. If youre a Film Geek, this is the best option for you because youll see a bunch-load of films before regular America sees it and youll be very interesting at cocktail parties. You can buy those here.

Aside from the badges there is a "general film ticket" sold by Waterloo video in Austin for $70 and it allows you to see all movies at the festival after the badge holder seats have filled up. Find out more about the 70 bone deal here.

But most of us are regular humans who just wanna buy one ticket to see one movie. Tix for the normals goes on sale 15 minutes before show time. BUT they suggest you get there an hour before to line up, especially if its a smaller venue (ours is somewhere between medium-ish and not quite small).

Here are directions from downtown Austin which 1.8 miles, 6 mins away.

We just added some Nerdcore Rising banners for you to use on your websites, blogs and myspaces.
Isn’t that nice of us? Yes… now you can promote our movie for us for free!

We here at Nerdcore Rising love Nerdcore Rising BUT sometimes, when youve spent too much time with a movie  even a movie you love, you just want to punch it in the face. When I’m feeling like this, it’s hard to remember all the good times we shared  the joyous tape-loading, the sexy graphics-building… the romantic candle-lit dinners. And today is Valentine’s day! I should be showering the film with node-based specular roll-off adjustments and caressing render files in a pool of rose pedals.

The worst part is… I’ve even been thinking of… working on other movies. Okay, before you call in the judge and jury, it’s not like I have slept with er, I mean, "worked on" another movie… I just think about it sometimes.

But it’s silly! Nerdcore Rising is the movie I love and now that were near the premiere-finish line (remember from the last blog that were premiering at SXSW!!)  I need to strengthen the loving bond betwixt filmmaker team and film.

So, here goes: Happy Valentines Day NerdcoreRisingTheMovie, we love you.

And to show you how much we love you, heres a jpg of us trying to fix your sound: 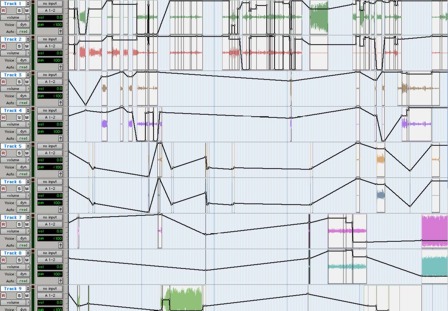 And heres one of us massaging your color-bars: 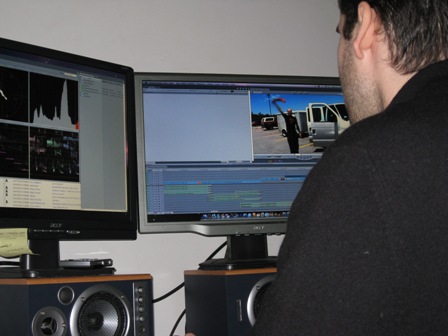 Your flowers will be arriving shortly.

For those of you who are not NerdcoreRisingTheMovie, we also wish you a happy day. But we dont want to caress your render files in a pool of rose pedals  I dont think any of us would be very comfortable with that.

Love,
Negin & All your Valentines at Nerdcore Rising

Today is a good day. Its a particularly good day because the Film Powers  those nebulous forces that have given us War Games, X-Men and Teen Wolf TOO (somehow all in the same breath)  have granted us a completely awesome place in the film world. Thats right folks, its been a while but finally, finally, finally Nerdcore Rising will be premiering at that venerable Texan institution, the SXSW Film Festival! People like Martin Scorsese, Charlize Theron and Sam Rockwell will also be there but theyll be a little less DS-dependant and a lot more glammed-up than your average nerdcore-ite. Either way, the celeb-name-dropping just goes to show that SXSW aint your grandmothers film festival.

We are full of glee and in a hot nanosecond from now,* well be providing you with all sorts of information about the premiere. Stuff like: Where? When? How? No, Seriously HOW did you get in?? But until then, were just going to take a moment to thank the nerdbase: a nexus of MC Frontalot fans, Penny Arcade enthusiasts, indie film geeks, and generally interested nerdcore peeps. So, heres that moment: THANK YOU. We couldnt do it without you. As we always say: the nerdbase is good above all things.

And, heres some broken record business: please encourage your friends to request a screening of the film in their town  especially if their town is in that part of central Texas which is less panhandle and more hill country and rhymes with Schmaustin.

And, here’s that point where you wish the record would just fly off the player instead of repeating itself: we still need more funds to get this thing done. Premiering is an expensive business replete with a world of sound-mixing, color-correcting, teranex up-resing and Kona card-renting. Once upon a time this was all jargon but now it’s meaningful to my clicking fingers and aching wallet. So, if you have it in your heart (er, rather, your bank account) to throw a couple of bucks at a little independent film, well, that would be super and amazing and full-on fantastic.

Here are some links to articles that verify the accuracy of the claims made in this blog:

PS: The trailer has some new faces in it  check it out if you’re curious. Was this post-script coy enough?

*In this instance nanosecond is being loosely defined as moment, hour, or half day

Hey Folks,
As the year draws to a very warm close (this is negin blogging from my parent’s house in sunny Southern California instead of my usual spot in that glacial drift known as Manhattan), we here at Nerdcore Rising wanted to take a moment and review the shit out of 2007.

We started out the year with a brief stint at the CES convention in Las Vegas where the fine folks at Stage 6 (AKA DivX) unveiled the Nerdcore Rising trailer and Episode 1 of Nerd of the Week to convention goers who were thirsty for some geeky rap to go with their DOTF’s (devices of the future). Even though the consumer electronics compound annual growth rates (CAGR) for the five-year period from 2001 to 2005 for units and revenues were 11.7 percent and 7.4 percent, respectively, that didn’t stop CES from handing out some ridiculous swag at the convention! As they say, when the CAGR is down, the logo-branded handout of tote bags is up! Way up! Nerdcore Rising managed to come back from Las Vegas with some fancy new pens, a free thumb drive, the renewed adoration of one of the highest resolution media platforms, and above all, valuable interview footage with the likes of MC Plus + and Doc Popular, all stuffed into a miraculously zipper free tote of the AppleTV variety.

We then moved into our new office where Andrew Mendelson, editor, co-producer, and regular fixture awaited us with open arms and a couple of terabytes of drive space to conduct an intensive footage blitz. Besides myself, Kimmy and Andrew, a media army of ready-to-kill soldiers of post-production joined us and because we love them, we will name them here: Torrey, Adam, Marisa, Allen, Millie, Tanya, Markus, Florence, and Sam. Though the office we had procured was the size of the aforementioned AppleTV tote, we still managed to stuff everyone inside  though not all at the same time and often with right foot on red and left elbow on blue.

In those new offices we managed to put up the trailer for the film. We uploaded it onto www.nerdcorerising.com where a few hours later, the site crashed. Apparently if Penny Arcade mentions something, people actually watch it. Digital street cred not only remained in tact but was given a much-appreciated boost. And, our grouplove for Tycho & Gabe not only remained in tact but was newly accompanied with blushing cheeks and massive giggling because Nerdcore Rising has an intense crush on Penny Arcade. We’re thinking of writing a love note, folding it 8 times, and tossing it to them in class but for now, we’re too embarrassed.

Hmmm More things happened but I got a little long-winded up-top and now I feel like this blog is reaching the shameful 600 word mark so I’ll save the rest of the year-in-review for later. But, for those that might occasionally wonder, the Footage Blitz of 2007 is still ongoing and will continue a bit into 2008. However, it will result in a film that will be watchable and entertainedable (that’s an example of two crappy word formations). It hasn’t yet, but as g-d is my witness, it will! (And that, is an example of an absolute guarantee.)

Signed,
Negin & all of your footage-humping pals at Nerdcore Rising