Also, one of the main network television shows  cant say which  will be at PAX to see what this Nerdcore Rising thing is all about. So, laugh and watch extra hard because we want to convince (or fool?) the three-lettered network channel about our awesomeness.

In other news, the movie will be opening for a regular ol theatrical run at the Hoff Theater in College Park, MD. This means, that if you call the moviephone number for that area, the dude that answers will list Nerdcore Rising, and its screening times, in his ridiculous signature voice. But of course, you wouldnt do that if you were reading this blog because youd be online and because its the year 2008. In which case, youd want to know that the movie will open on Friday Sept. 5th and the details can be found on their website:

Very soon the inimitable Mr. Dan Johnston (our all-knowing web czar) will be designing a beautiful page that aggregates all of our screenings on an easy-to-use grid. This will be great because, folks, fall is going to be an intense season for Nerdcore Rising!

For those that will be at PAX don’t forget to relish in the works of MC Frontalot, G Minor 7, Blak Lotus, and the Categorical Imperative as they plan on destroying the PAX crowd with some seriously catchy Nerdcore hip hop. And, please heed the message at the end of the video or else. (Do you like how I did that? How motivated are you to see the video now, huh?)

I believe the Boston situation deserves its very own brief entry as the previous blog (AKA The Bumblingest Blog from the Annals of Convoluted Bloggery) has left some confused. So, here goes:


How to Obtain Free Tickets to the MC Frontalot/Prince Paul After Party at the Independent Film Festival Boston: A Four Part Treaties

Of course, if you want to see the movie in the Boston area, youd need this information: 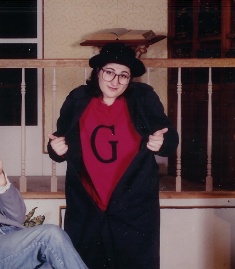 Hope that clears up our role in the IFFBoston and its closing night ITA/Nerdcore Rising party.

With a larger sense of clarity,
negin

*I mean, I dont want to brag but that part landed me the prestigious Best Actress trophy in the annual Palm Springs High School Thespian Awards. It would have been unbecoming had I mentioned that in the actual body of the blog  of course not everyone is as fortunate as I am to win the much sought after PSHSTA. But I did feel that it warranted a small utterance in the post-script space. And again, without wanting to brag, a photo of me in that role just seemed necessary. I’m 16 in the photo. And yes, a drama geek of epic proportions.

Sold out houses at the screenings led to an unprecedented upswing in committed Dallas-based fans, insuring future gains in area screenings.

The post-screening MC Frontalot show drew fans into the upper-indices of joy and rapping-alongedness. This is largely due to the total quality management of film sponsor and post-production house REEL FX. Wendy Teague (Supervising Manager of Cool), Kathryn Harper (Managing Director of Awesome Services), Brandon Oldenberg (Vice President of Unbelievably Chill) and Chuck Peil (Executive Vice President of Ridiculously Helpful) provided support services that cannot be quantified at this time because they were: OFF THE CHARTS!

Other items of note: Nerdcore Rising Industries would like to thank Moxygecko & company (from Austin) and the Stephenville 5 (from Stephenville). They imported a set of friendly eyes and enthusiastic/well-functioning ears to the screenings. It is our hope to continue outsourcing love & support operations to those two companies.

Retail consumption of t-shirts enjoyed a 1000% gain in Dallas up from zero ( ah because we had never sold them before). Our retail efforts were so well-received that the web division of Nerdcore Rising Industries will also make them available for sale in the coming day. Literally, like tomorrow.

Future investments include the Atlanta Film Festival where screenings on April 12 & 15 are expected to parallel or even out-perform AFI Dallas. For shareholders interested in going to those screenings, please visit www.atlantafilmfestival.com for ticket information.

The Auditors Report of Details is below.

If you wanna see uber cool animation and motion effects from our Dallas sponsors, visit:
www.reelfx.com

Photos below: 1) a cheering Dallas audience at our second screening, 2) a meticulous 17th century fortress casually erected over one of the animators desks at Reel FX, 3) a spectacular collection of comic book/cartoon figurines also casually hovering over a desk at Reel FX, and 4) close-ups of a few of those figurines.  I know, I know, it makes me want to work there too… Sigh… 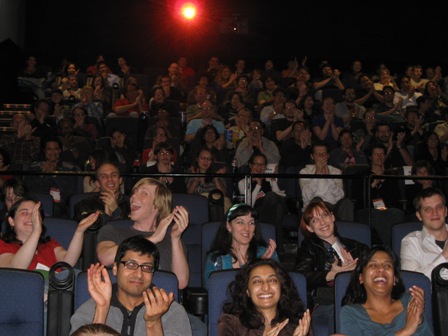 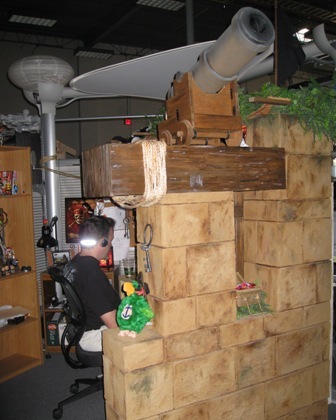 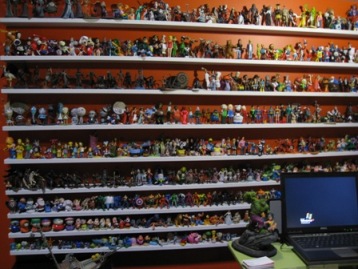 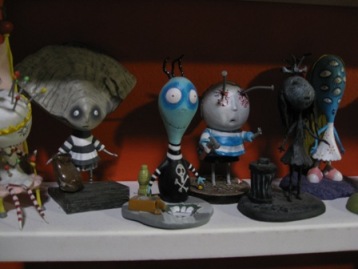 Frontalot will be making a stop in grand ol’ New York City to perform at the Knitting Factory as a part of his Secrets From the Future Tour with Schaeffer the Darklord. So, if you’re reading this blog and you’re in the larger New York Metro Area on Nov. 11, which is a Sunday, do come check him out. And say hello to Team Nerdcore Rising because we’ll be there shooting people, with cameras. Of course, there are other dates and other cities and more Frontastic musical joy to be had but for that info, we direct you to the site of the man himself, Frontalot.

Also, bassist Brandon Patton (aka Blak Lotus) had this little tidbit to share about their current touring experience:


Our tour van has had it’s side view mirrors stolen THREE times, someone just broke in through the back window to steal a $40 hand truck, and then we just fixed that, and somebody crashed into it while it was parked!

Nevertheless, we shall rock your nerdy pants off [in New York]. And then, somehow (we haven’t figured this out yet) we shall drive across country for the rest of our tour.

A $40 hand truck!! Well, if they stole that they probably needed it more than Frontalot et al does. Consider it an early holiday gift to a stranger that had some very pressing object-moving needs.

Sweet. Go see the band live. You’ll be hooked forever. And when the time comes, Frontalot will summons you and his other faithful nerdcore-fandroids to conquer the universe- For now, he’s just slowly conquering it one solo rap at a time.

Don’t Front like you don’t wanna see Front. Here’s some tour dates for Frontalot with Schaffer the Darklord. For more detailed tour info visit: www.frontalot.com. We?ll bring you period reports from the band on the road?